We had been cruising for several weeks on relatively flat grounds and we hungered for some altitude. Also, subconsciously, we had all been wondering what it would be like to climb above 4000 metres, and we were about to find out!

But first, we had to get there. On our way from the Uzbek border we planned a strategic stop in Dushambe, the capital, where we would end up spending a week and which will forever be in our hearts for 4 very special reasons;

1) We were shocked to discover that, although it’s the gateway to the Pamir, it’s hugely understocked on outdoor equipment. It took us all week to find decent sleeping bags!

3) There’s a Auchan (French hypermarket) there and we went crazy (and so did our Mastercard which we used for the first time in 5 months)! We even splashed out on a bottle of wino!!

4) Last but not least, we were hosted by an amazingly cool family of South Africans teachers/cyclists who we hope to cross paths with again someday!

So, finally, off we were! The first few days out of Dushambe are spent in open countryside, going up and down fluorescent green rolling hills (thanks again for that Spring!) and little towns where everything is ready available, especially friendly locals. Once we even had the pleasure of being hosted by the owner of a public bathhouse which actually had a sauna! Just to make this little anecdote a little better, at the time we had been sharing the roads with JoJo and Jakub, two Swedes, and it had been a cold and rainy day; so you can imagine how it felt like an heavenly gift! 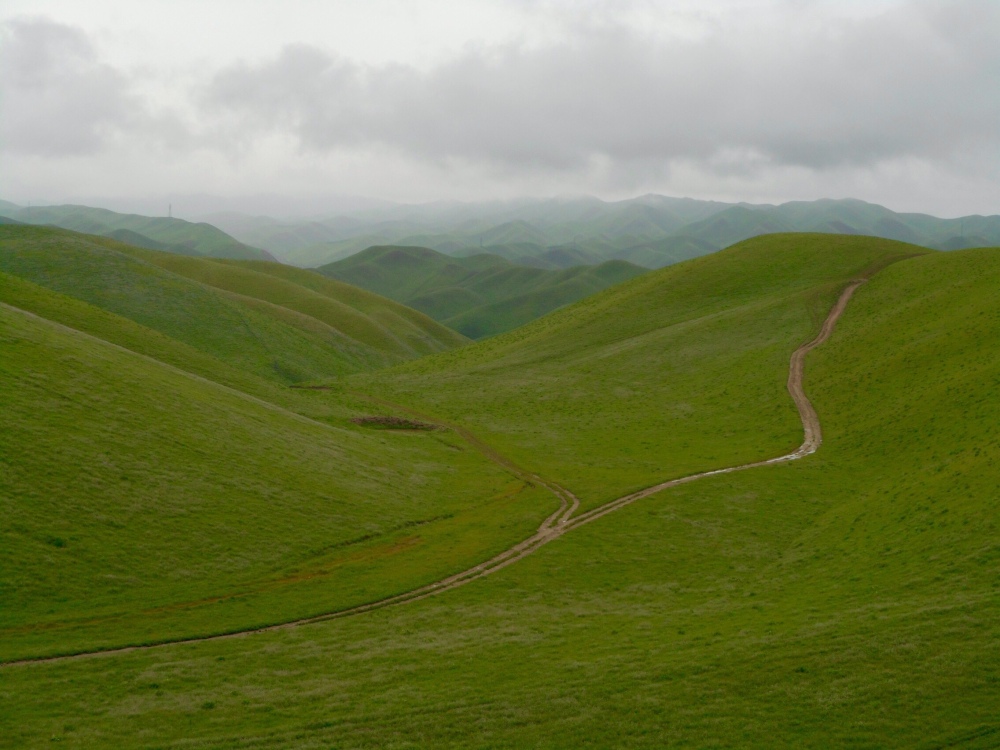 On the fourth day after Dushambe, we climbed all morning on a dirt path. Eventually we hit some snow which still lingered at the side of the road and we reached our first Pamir mountain pass, the scenery changed drastically and after a long, steep downhill between beautiful mountains and a river 200 metres below you, the valley opened up and we were, at last, plunged into another world.

Anyone who has ever been to the Alps or similar knows what I’m talking about; naturally, the first thing you notice are the huge peaks just ahead. You’re at 1000 metres so how high are they? You slow down just a little and take a second to study the enormous, green valley and you immediately remember that you’ve analysed the map various times before and that on the other side of the river is Afghanistan. That little village on the opposite shore is that country you’ve heard so much about on the news! And then, as a good cyclist, you also remember that what had marked you the most about that map was the fact that this is also the place where those hairpins were and, undoubtedly, as you get closer to the guardrail, you see it many many feet below you; fun at it’s purest. 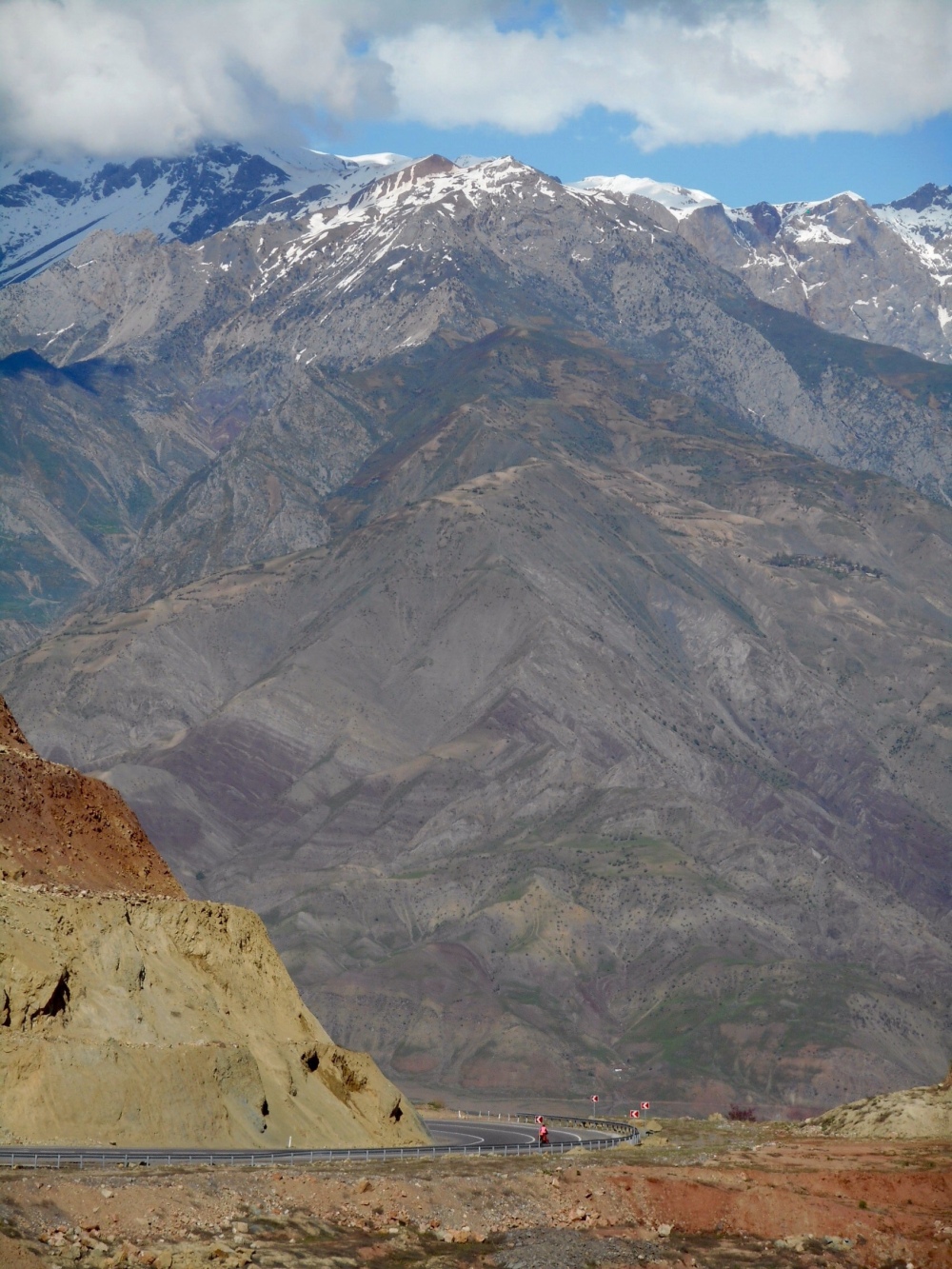 It had been an overall difficult, hot and sticky day but we found a wild camping place with a fountain so, after a cold shower and a warm dinner, we tooked in for the night and dreamt of what else the Pamir would have in store for us.

Pedaling along the Panj River, you slowly wind up, following the slender valley and experiencing different levels of road surfaces but always along the same magnificent landscape, one which has been carved over million of years by the elements and which has left a magnificent scenery where you can always hear the rumble of the water and very regularly see Afghan villages on the other side. Sometimes they are so close you can actually see inside the houses and shout “hello” back to the kids who are waving at you from that world so far yet so close.

One evening, we found a great camping spot sheltered from the wind but, maybe, a little too close to a village which laid just on the other shore of the river. Just as we were about to wash up and wrap up for the night, a group of Tajik soldiers approached us and suggested we may want to move a few hundred yards in any direction to avoid said closeness. Obviously, at 10pm the last thing anyone wants to do is move camp, so we politely insisted to stay and after a little while they agreed but only if two sentinels stayed with us, at an appropriate distance, and kept guard all night. We offered coffee, they denied. In hindsight, knowing what we knew at the time about Tajik customs, we should have gone for black tea.

Having said this, it is a quite unique experience to be able to discretely observe a country while in the absolute safety of another and we rather enjoyed it. In two small cities along the way, and only on special given days, it’s also possible to attend markets where Tajiks and Afghans gather in unique free zones and exchange not only goods but also time together.

After all, these valley knew no borders until very recently and family bonds are very strong in this part of the world.

The Panj joyfully escorts you all the way to Khorog where we grasped the chance to stock up on supplies and, why not, splurge on a restaurant with more than one dish on its menu. As soon as you leave its hustle and bustle, the road slowly takes you higher and further away from towns and through villages, then settlements. By the time you arrive to Jerundy, which is simply 8 houses built around a smoking hot river, its hot water springs renowned for bringing health to your joints and muscles are unmissable in any time of the year and an absolute during the cold months (i.e. from October to May). After all, how many times does life offer you the chance to stay in a Sovietic Sanitarium style facility?

Without any doubts though, the part of the Pamir which we loved above all is the one which is above all the rest… we’re talking altitude now! At this point you understand why most people tend to concentrate their efforts on this section.

Not having any previous practice at this height, we weren’t really sure what to expect but the result is far better than we thought; most peaks were still snow capped but the roads were clear and so was most of the land around us. We had never thought that nothingness could be so magical; tranquility is queen and wild camping is as easy as pointing with your finger and saying “there”!

This plateau is basically just a series of huge valleys, each with its own peculiarities and colours. At every turn you are astonished by the latest mouth opening view or the surprise of either a short climb to warm you up a little or a pleasant descent with a nice little bend, if you’re lucky.

Sceneries come and sceneries go on the Pamir but, without any doubt, the element which remains the most constant along the way are Tajiks themselves. 7 out of 10 times you will feel like you’re alone until you hit any type of settlement, big or tiny as it may be, and then the human contact is inevitable. Level 1 is kids waiting for you by the roadside, waving, shouting “hello” or simply looking at you astonished. Next levels include being invited for tea and biscuits, lunch or dinner and even a bed or a safe place to set up the tent (locals consider the Pamir to be highly dangerous and grasp any chance to tell you stories of wolf packs and snow leopards).

It’s a common feeling among travellers to cherish the time spent among this unforgettable mountain chain for as long as one draws breath, where a great cycling challenge merges with amazing views, the chance to immerse in the local culture and also share unique moments with its inhabitants and go back home with lots more than just a couple of SD Cards full of pictures and an applauding Strava account.

If you enjoyed this entry and would like to know more, we made a video about our time spent in Tajikistan. You can find it on our YouTube channel, here; https://youtu.be/7PndtqDROdo and there is also an article in Bike Magazine (where we write on a monthly basis) free here;